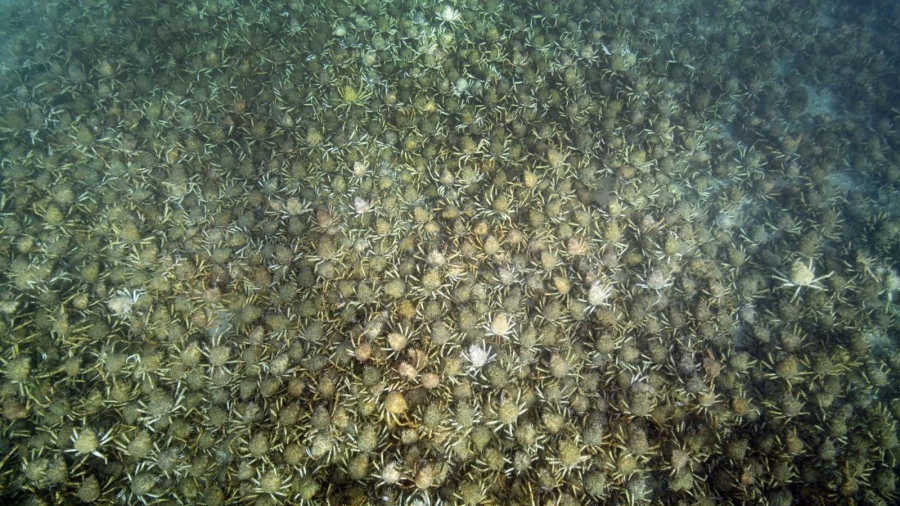 Marine Carers show your support for spider crabs and visit the Change.org campaign site as referred to in the article below.

Even now, as the water temperature starts to drop, they’re making a return.

Spider crabs are marching into the bay, and divers want a fishing ban – The Age Newspaper – reporter Miki Perkins 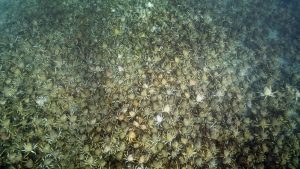 If you peer into the waters of Port Phillip Bay near Blairgowrie and Rye, holiday towns on the fringes of Melbourne, you might see dark shapes trundling across the sandy sea floor.

So far, the numbers of giant spider crabs in the bay are small but come mid-April, these hoary-backed crustaceans will congregate in the thousands ahead of their annual winter moult.

This phenomenon reached a global audience when it was featured on David Attenborough’s Blue Planet documentary series last year, drawing new visitors to the Mornington Peninsula.

But it has also made spider crabs a target for recreational fishers, leading to heated stand-offs last year between local divers and fishers who, in some cases, were hauling bucket-loads of crabs out of the water.

Divers and the state’s national park watchdog are calling for a halt to spider crab fishing during their critical moulting period. Failing that, they want a ban on fishing at piers and jetties, and a lower catch limit than the total 30 crabs.

AJ Morton, who owns peninsula diving business Dive2u, says there has been almost no research done on giant spider crabs. They come into the bay from locations unknown and aggregate (a “safety in numbers” manoeuvre) while they moult in the water off the peninsula and Geelong, as well as along the state’s ocean coastline.

Last year, when the spider crabs came into the shallows, people started dropping nets and taking bucketfuls, he said. Within days, “hundreds” of people came to catch the crabs.  “It was extremely devastating to witness it, and you couldn’t do anything about it, it was legal,” Mr Morton says. “The netting of the crabs is one thing, but there was also damage to the pylons and sponge wall, and zip ties, lost nets, and general rubbish left behind.”

In 10 days, all of the giant crabs at Blairgowrie pier – estimated to be about 2000 – were gone, he said. The pier is one of the most-dived places in Melbourne because it has beautiful sponge walls on the underwater sections of the structure.

And now the crabs are back. There were some at Blairgowrie pier last week and divers have spotted others between Sorrento, Rye and Mud Island.

A petition on Change.org calls for action in response to last year’s “overfishing”: “We don’t want the main event fished, pure and simple. For the wellbeing of the crabs during their vulnerable period, and because there are flow-on tourism benefits for the Mornington Peninsula,” it says.  Victorian Recreational Fishers executive officer Mike Burgess says everyone was caught by surprise when fishers started targeting the spider crabs last year.

For one thing, crabs don’t taste good when they are moulting, he says. They suck in lots of seawater as their new shell grows and their meat goes mushy and tasteless.

The association has been talking to its members and Mr Burgess is hopeful it will not be an issue this year.

“It has been a flash-in-the-pan type of thing that caught us by surprise, but we’re going to do some work to prepare for the migration and get good quality, fact-based information out to our fishers,” he said.

Dallas D’Silva, the director of fisheries management at Victorian Fisheries, said it would continue to monitor the fishery closely this year with patrols and further research. The recreational catch limit of one litre or a combined total of 30 crabs is unchanged.

“Fishing is confined to a small area and there is no sustainability concern,” he said. “Commercial fishers are also not targeting them, so the current controls mean lots of crabs get to moult.”